After some of the most pleasant winter weather ever here in the Rio Grande Valley of south Texas, we saw that the forecast was calling for the entire Midwest to turn into a deep freeze. These Arctic blasts seldom make it all the way to the tip of Texas. But for some reason this cold front had the southern half of Texas in its bullseye. Where we are wintering is actually in a sub-tropical zone, and freezing temperatures are unheard of. So when we saw forecasted lows in the 20s, everyone took notice.

Our first plan of action was to pick the citrus fruit before it froze on the tree. The day before the big freeze wasn't very pretty. It was misting and in the 40s when we braved the elements and Mark mounted the ladder to get those best fruits at the top of the tree. We first picked the tangerines at Denisa's Mother's house, then we switched to oranges and finally grapefruit. It would be interesting to know how many pounds of fruit we picked today! 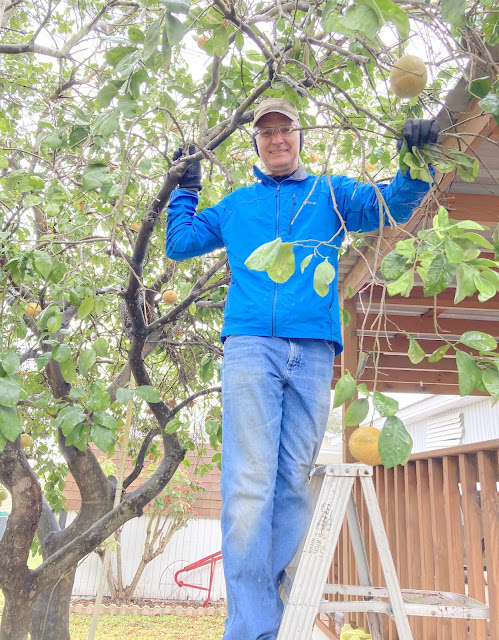 That might be the first time we ever wore ear muffs and gloves while spending time in the southern tip of Texas, and it was just going to get colder! Because all the fruit was wet from the rain, it had to be laid out to dry before we stored it. This is not even half of our harvest today. 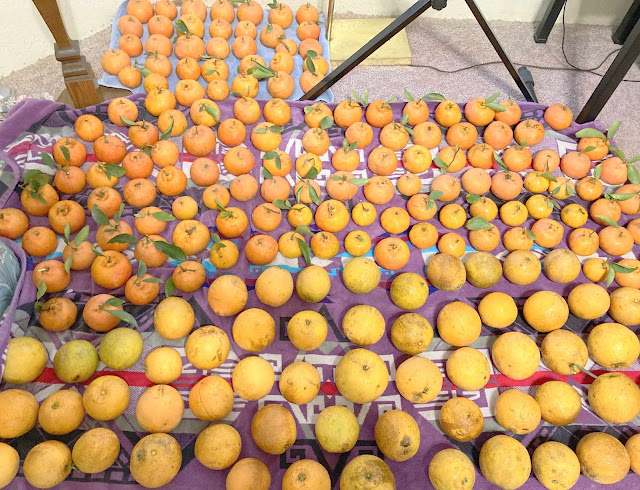 Mark disconnected the water from the motor home and we turned on our propane heat as we prepared for the first cold night. The next morning we saw the first icicles we have ever seen in our time spent in South Texas during the last seven winters. As you can imagine, it was a very slick first step out of the motor home! 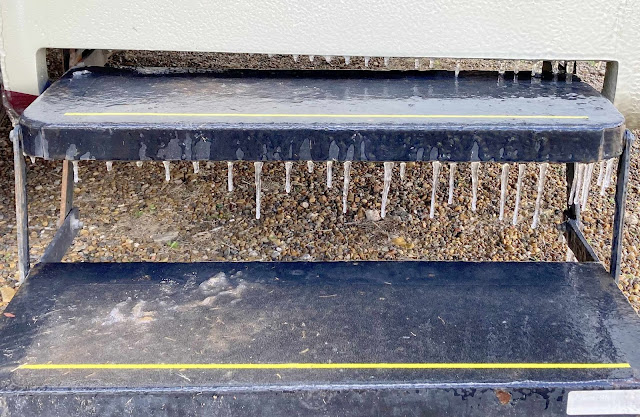 Because of the moisture in the air, the north side of our motor home AND the highways were also covered in ice. We didn't want to get out on the roads this morning, as south Texas drivers have absolutely no experience in driving on the ice. Mark needed to run an errand, and decided to get gas for our pickup this morning. That's when he found out that the first gas station he checked was closed because it had no electricity. At the second station the credit card reader was iced over. This is certainly unusual weather for Mission, Texas! 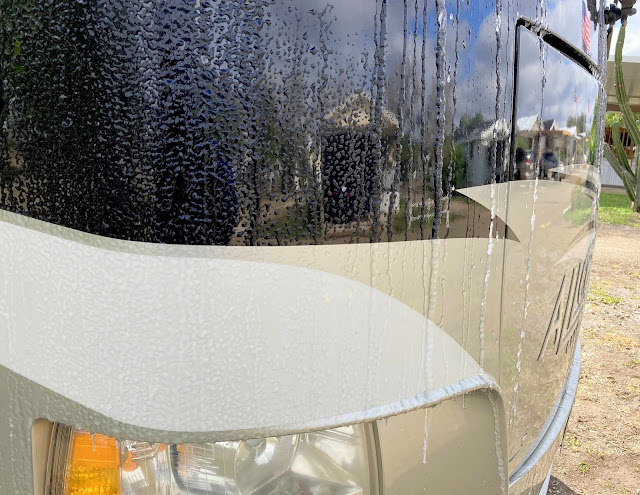 It was record breaking cold, as the low temperature plummeted to 21 degrees that first night. This cold snap crushed the 74-year-old low temperature record that was 35 degrees. We were 14 degrees colder than the coldest temperature this area had seen this day in three-quarters of a century! That's cold enough to form icicles on our aluminum wheels. 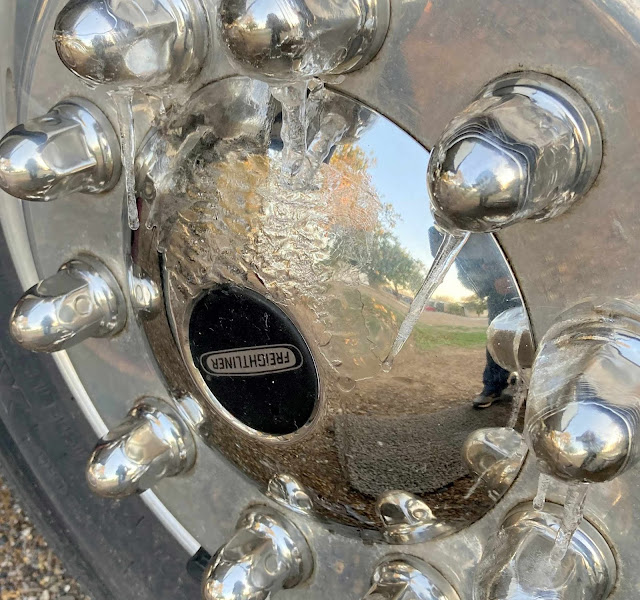 The news reported that most of the state of Texas also broke low temperature records. In fact, this was the first time in Texas history that every county in the state was under a winter storm advisory. We also found out that millions were without electricity in this state. We were lucky to never lose power, but about half of our RV resort neighbors did. We saw park residents invite friends over to warm up, or to sleep over. In this time of Covid isolation, suddenly social distancing had to be interrupted to keep people warm.

We were doubly blessed in that Denisa's Mother's house also never lost power. With high temperatures in the 30s, the park looked like a ghost town as everyone huddled inside for warmth. The electricity was off in all the park's buildings, so there was no place to group together. We were glad that we picked fruit yesterday, as the tropical plants outside took a major hit from the extreme cold. 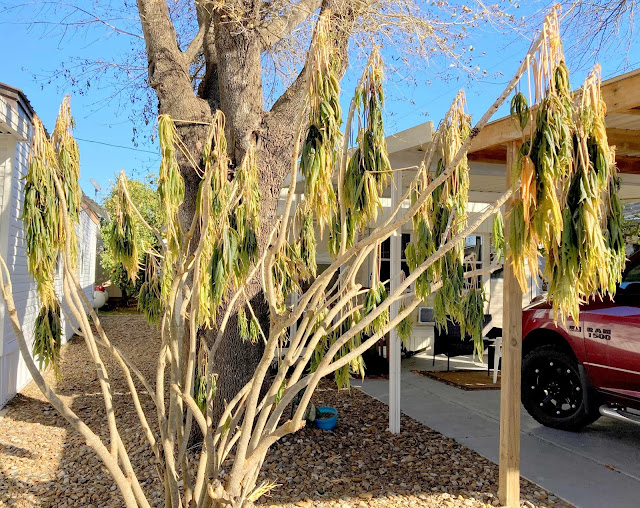 One of Denisa's favorite tropical plants is the Crown of Thorns, with its brilliant red flowers that stand tall and bright atop this succulent's branches. She walked by this plant every day and always enjoyed it. It's been growing outside year-round for years. But now its bloom heads are bowed and its thorny branches are folding. We're afraid that 21 degrees will kill all the tropical plants, and some of the palm and citrus trees too. 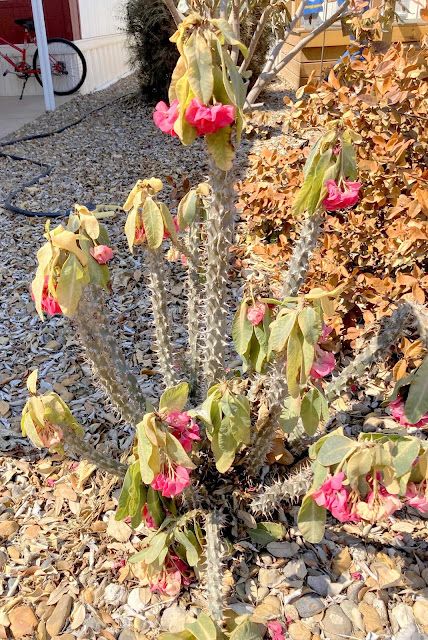 This Arctic blast had a second wave, as we endured a second night with record lows in the 20s. It was interesting to watch the local news, with broadcasters warning of the dangers of such low temperatures. Many of the winter residents here have spent their entire lives in the cold of states like Minnesota or Wisconsin. They scoff at this "cold" when their home states are experiencing temperatures like 40 degrees below zero right now. But those states are much better prepared at handling those cold temperatures, with insulation and generators and the appropriate road maintenance equipment. We also found out that the wind generators up north are outfitted with the equipment to keep those giant fan blades turning even in the coldest weather. The Texas wind generators (that provide 23% of the energy here) froze up because they aren't equipped to withstand these temperatures.

As our food supplies dwindled, we checked to see if neighbors needed anything. We had short lists from four different households when we made a trip for groceries. We had a hard time filling the orders even with stopping at multiple grocery stores. Many stores are closed because they don't have electricity. The ones that are open have been over-shopped by nervous residents. The bread aisle was completely empty . . . 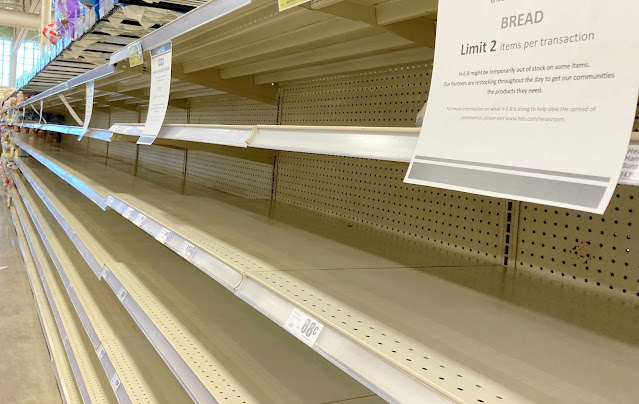 as was the milk display. We also couldn't find a single egg for sale in our multiple stops. 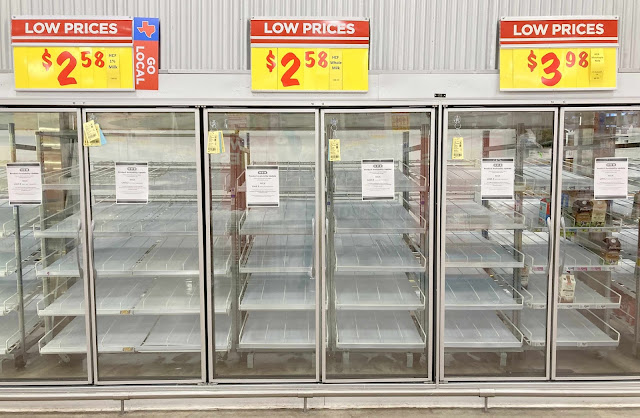 By the next day, every bit of produce and meat were also gone from the local stores. With highways closed north of here, it will take another day or two to get supply trucks down south to fill these shelves. We also found lines that stretched for blocks at open gas stations and propane shops, as everyone got nervous about running out of fuel.

Since half of our park residents are without electricity, we got new neighbors as RVs rolled into any open sites that had power. That is definitely one advantage to having a home on wheels in challenging times like this. We had plenty of food in our pantry, and we could survive on the fruit we picked for a good long while. Being blessed with electricity, it was easy to survive Texas's record breaking cold. For our friends and neighbors without electricity, it was a much more challenging week that South Texans hopes we don't repeat ever again.