When we visit a place that is new to us, we often notice things that are unique to that location. After two and a half weeks on the unique island of Newfoundland, Canada, we made a list of things that are different here.

After driving across the entire province, the highest speed limit we remember seeing posted was 100. If you think that is fast, remember that is 100 KILOMETERS per hour, which is about 62 MILES per hour. But the thing that is unique to Newfoundland is that everyone drives considerably faster than the posted speed limit. If it is 100, the main flow of traffic seems to be 120, and if it is 50 then everyone is driving 70. In all our miles traveled, we never saw a single traffic stop and very few police vehicles, even though everyone is breaking the speed limits. Fuel isn't cheap here. We consistently saw gasoline selling for around $1.559 per liter. That would be $5.91 per gallon. Ouch! 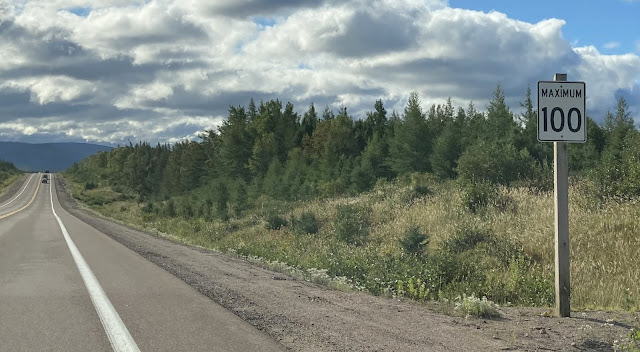 While things are more urban in the city of St. John's, we loved traveling through the small villages of rural Newfoundland. We noticed that the houses throughout the province were very neat and well maintained, and that's a great uniqueness. We also noticed that most of the village houses were very plain in structure, and had little or no landscaping around them. They also don't put central air-conditioning in homes on this cool island. But we often saw mountains of firewood as people were getting ready for the long winter.

We also noticed that 90 percent of those village houses have glass windows in their front doors. This is a province known for its friendliness, and maybe that's why they wouldn't mind anyone coming to the door to look inside. 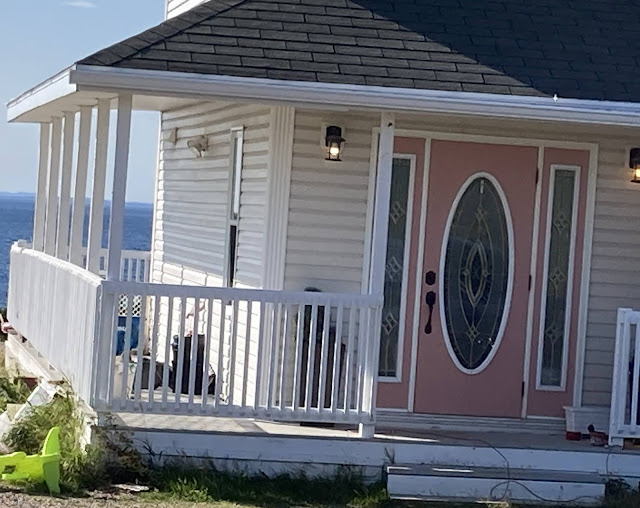 We noticed that friendly attitude with all the locals we met. Our favorite was the fisherman that explained his process for drying cod, and then wanted to give us one of his best fillets to try ourselves. We drove through the town of Gander, which welcomed 38 jetliners stuck in the air when the U.S. airspace was closed during 9-11. Suddenly this little town had 7,000 unexpected guests, and the local citizens all chipped in to feed them for most of a week. They've made a Broadway musical named "Come From Away" about that Gander experience that is based on the spirit of hospitality in Newfoundland. 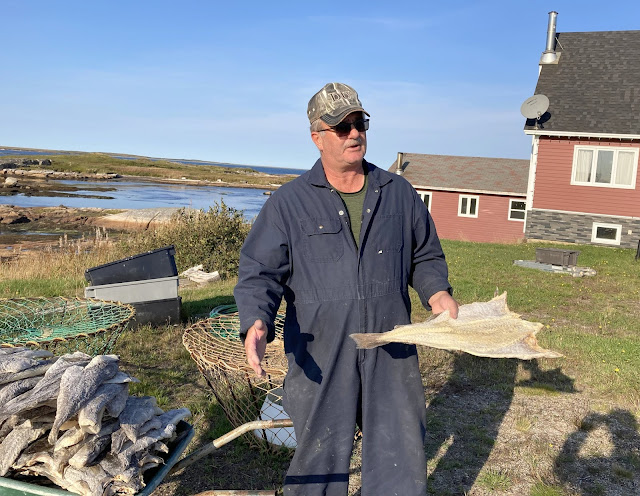 Besides eating unique things like dried cod, Newfoundlanders have some other unique foods. We tried mooseburgers here, and scrunchies (little pork rinds). We did not try a local mainstay that you can purchase by the bucket-full--cured trimmed navel beef. 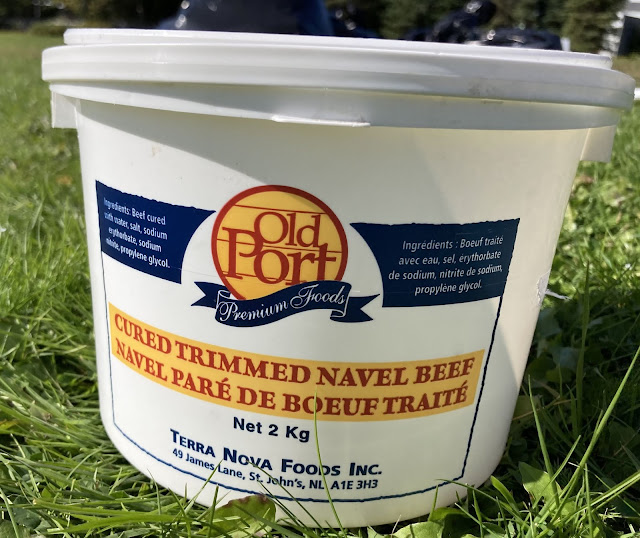 While English is the main language spoken in Newfoundland, we found that their version was often hard for us to understand. Especially the old-timers have a cajun-irish lilt to the language that we couldn't decipher at times. One of the favourite local phrases is "Yes B'y" and we thought it was fun when we saw it on a sign at the grocery store. From what we can tell, it is an exclamation of agreement, and it is sprinkled liberally into a conversation with a Newfoundlander. 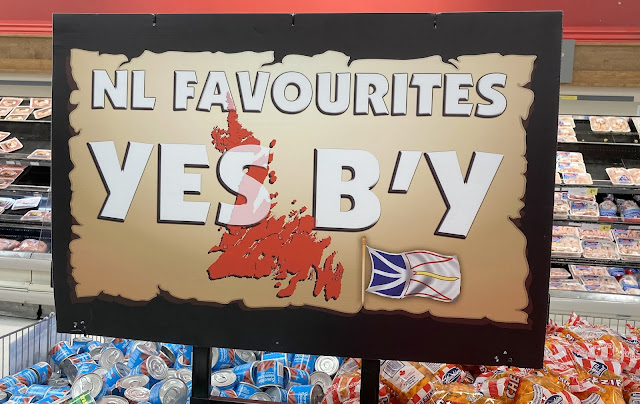 Besides grocery stores, there are a few Walmart stores in larger population areas in this province. We saw evidence of different spellings here in words like "favourites" and "super centre." French is their second language, and most signs in public places are written in both English and French. 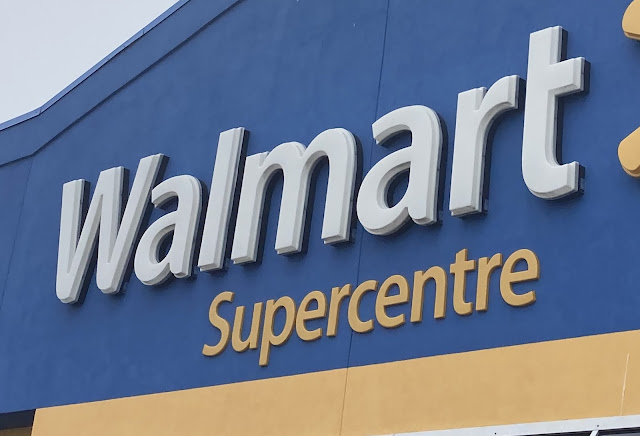 In our trip to Walmart we found that social distancing is strictly enforced. At the checkout they hire one person to stand guard and motion when the next person in the 6-foot-seperated line is allowed to approach one of the staffed registers. 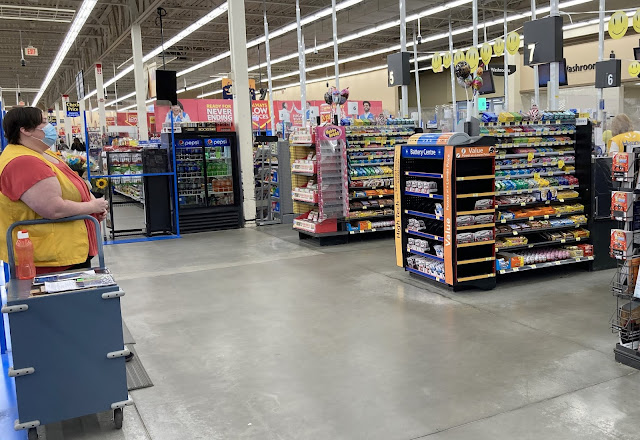 We did a little shopping, and found we could make most purchases with our international credit card. We have to say that we had a uniquely difficult time getting some Canadian currency this trip. After striking out at several ATMs that rejected our cash card, we found it was our card's fault. Even though we had let our bank know that we would be traveling internationally, they never put the dates into their system. So our card kept being rejected at the ATMs. We just thought that Canada didn't want to give us any cash!
One of the delightful uniqueness of Newfoundland was the absence of bugs. Even though we visited before the first hard freeze, we never saw a mosquito. This is the land of lakes (usually called ponds) and rivers (usually called brooks), with standing water everywhere. So we can't explain why there are no mosquitoes. But we enjoyed sunsets by the lake without swatting the blood suckers that are so prevalent in Alaska. 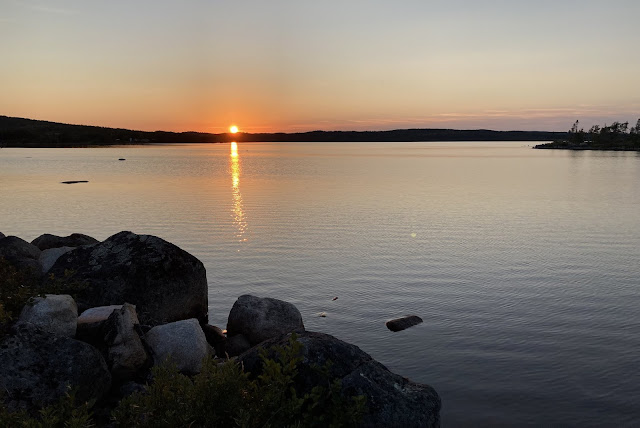 One of the most unique parts of this island is the time zone. We had never heard of a thirty-minute time zone, but that's what they have here. While it is 7:24 in central time zone, it is 2.5 hours later in Newfoundland at 9:54. We never got a clear explanation for that unique time zone. 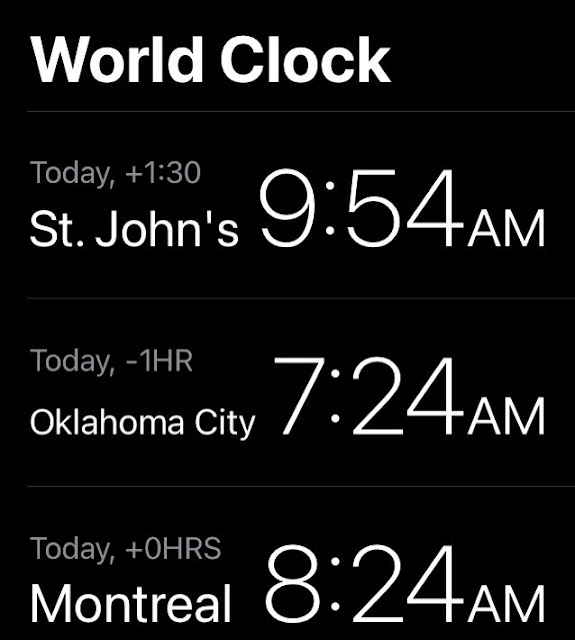 In Newfoundland, you don't go on a vacation--you go on a holiday. RVing is alive and well in this province, and we saw some beautiful boondocking spots where RVers are welcome to stay overnight for free. It looks like a great place to spend an entire season! Because it is a relatively small island, it's interesting that RVs for sale in Newfoundland have few miles on them because you don't have to drive far to go on holiday here. Yes b'y, this is a unique place, and some of our favourite things were the unique things we got to experience during our holiday!
Posted by Denisa and Mark at 10:43 PM