We invited the boys on the annual "Girl's Trip"

Denisa and her Mother and sisters have been going on an annual "Girl's Trip" for around 30 years. Occasionally, our husbands have been invited, but not often. This year we invited them to join us, so our group was supposed to be bigger. But an important doctor's appointment kept Denisa's middle sister from going with us this year. So we set off on our trip to Branson with just five people for our annual trip. Since being sick with Covid, Denisa's Mother has been working hard to get strong enough for this trip. 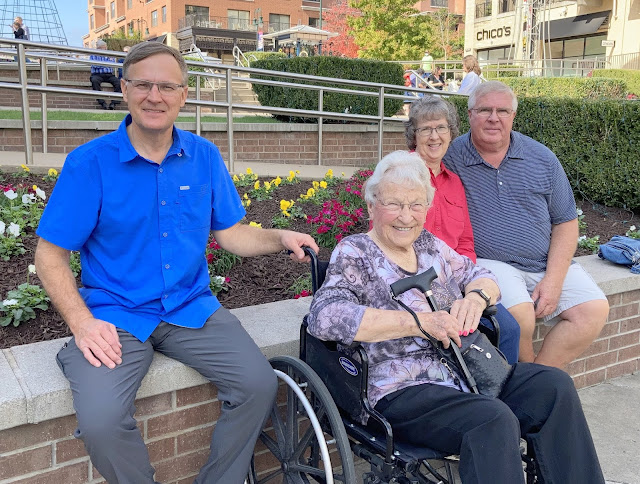 Our first stop was Lambert's for lunch. We love the "Home of Throwed Rolls" and we're glad to report that they are open for business as usual. We caught a few rolls from the thrower across the dining room. 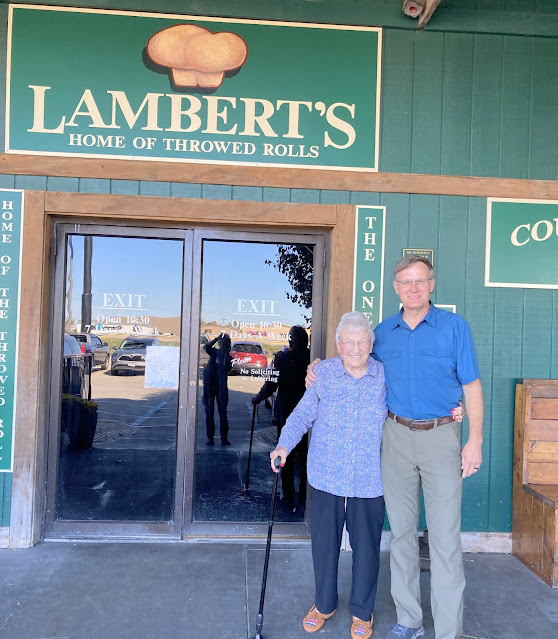 Their entrees are generous, and Mark reported that his chicken fried steak--served in a skillet--was very good. In addition, you were treated to the "pass arounds" that are served from big bowls by the wait staff. We got fried okra, macaroni and tomatoes, and fried potatoes to go with our already full plates. And don't forget that we also enjoyed plenty of those throwed rolls! 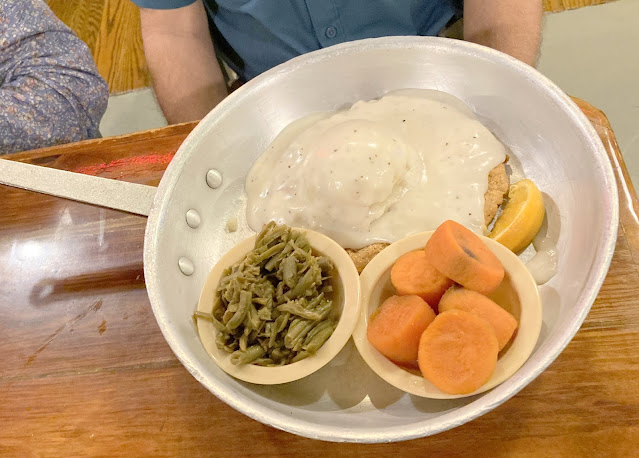 We had pre-purchased our entertainment tickets, and we had chosen to go to "The Haygoods." If you have been in Branson during the last 30 years, you have probably seen this family perform. They started as a family act with eight little children in Silver Dollar City. Now those musical children have grown into talented musicians that know how to put on a great show. 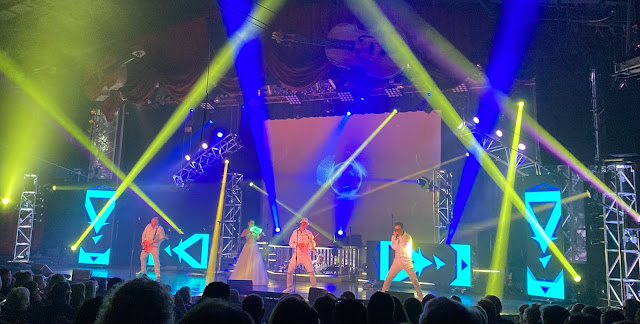 They have an extraordinary light show and technology to go with their music. Some of the lights were neon bright like in the picture above. Some of the lighting was more subtle like the moving scenes of American roads that were projected onto their instruments. How cool is that?

While there are 7 sons and one daughter in the family, two of the siblings no longer perform. The one girl is an accomplished harpist, and we were surprised at how fun they could make the three harp songs during the show. 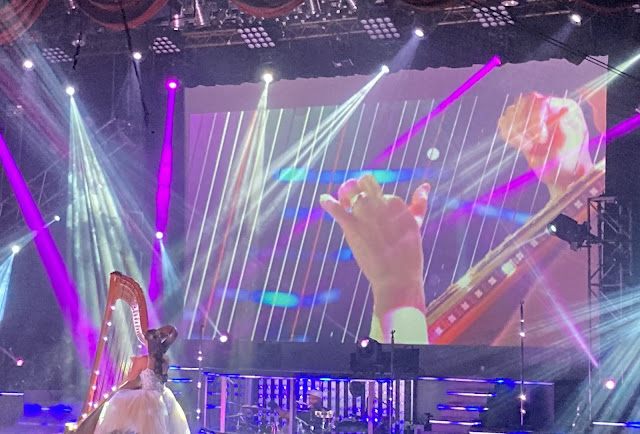 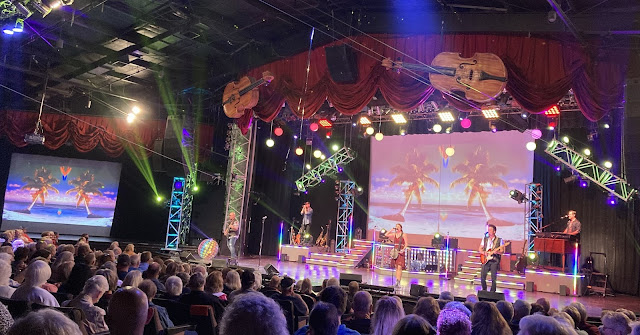 It was late when we got back to our rooms at the Savannah House. Our favorite part of a stay here is the warm dessert bar each evening. It's timed to be served when visitors are returning from their evening shows, and it features fresh-baked cookies, warm cobbler, and ice cream. We forgot to take any pictures of the Savannah House and it's yummy desserts and breakfasts. So we'll include instead a picture of one of the monarchs that are migrating through right now. 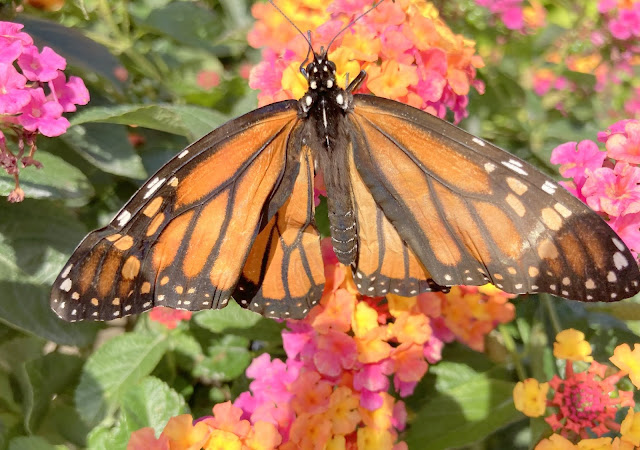 The colorful lantana flowers must be a favorite for the butterflies, as they didn't mind Denisa taking their picture. They are eating this morning and warming up to start another day of flying towards their winter home in Mexico. We are in a monarch flyway zone, and these hardy butterflies travel up to 3,000 miles from their summer home up north to their winter home. This monarch's wings look a little folded  and tattered, but it has a long way to go on its journey. The fact that they can fly so far on those delicate wings is another of God's wonders! 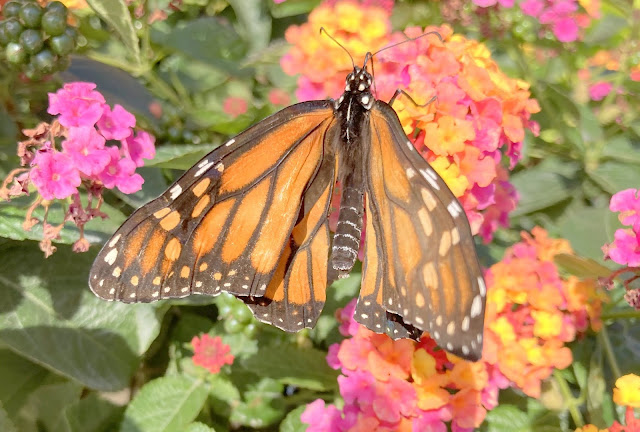 In between eating and going to shows, we also did some shopping. We checked out the stores at Branson Landing, and we timed it to see the fountain and fire show that is choreographed with music. It's a different show each hour, and we enjoyed "The Star Spangled Banner" at noon. 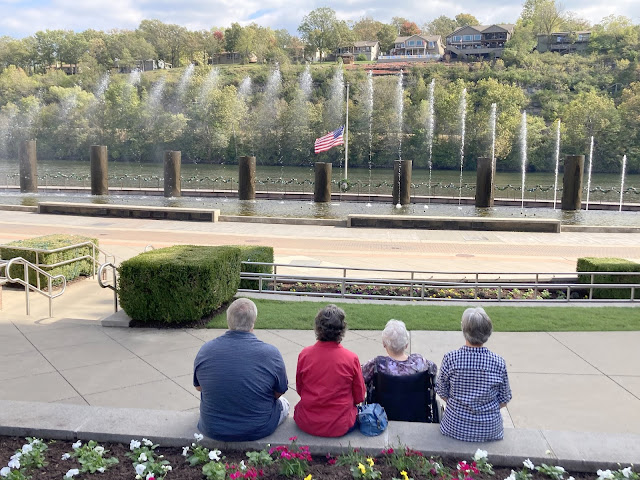 We had absolutely perfect weather to enjoy being outside! 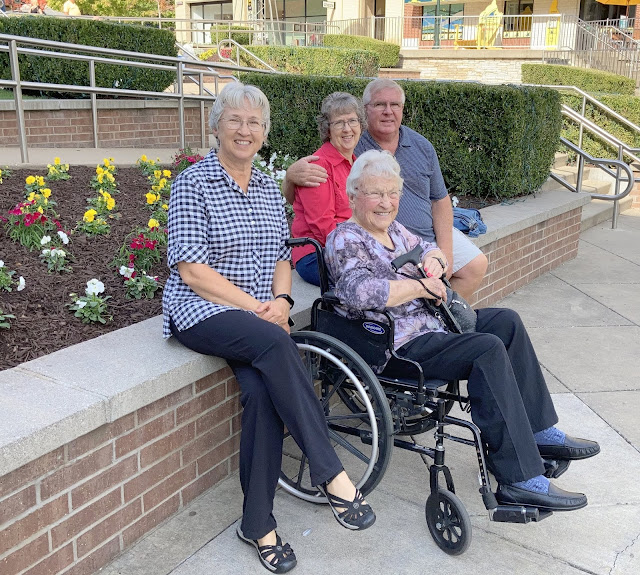 Shopping this trip includes looking for new hiking shoes. We have literally worn out our boots this year, and we need new ones. Denisa is opting for a new pair of New Balance hiking tennis shoes, while Mark is trying a high-top Hoka boot this year. Over our seven years of full-time hiking, we have tried lots of hiking footwear. 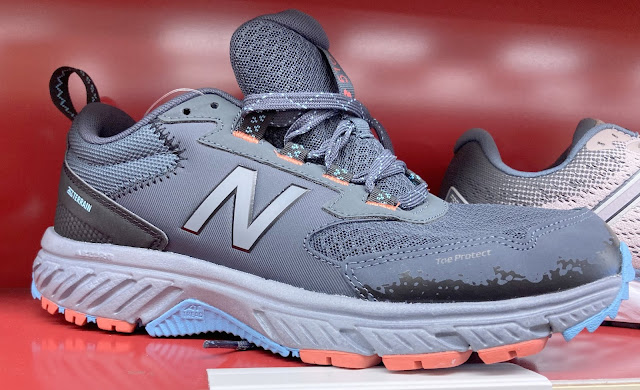 We had afternoon tickets for the Sight and Sound Theater. We've been here to see the shows about Noah, Moses, and Jonah, and these productions never disappoint. 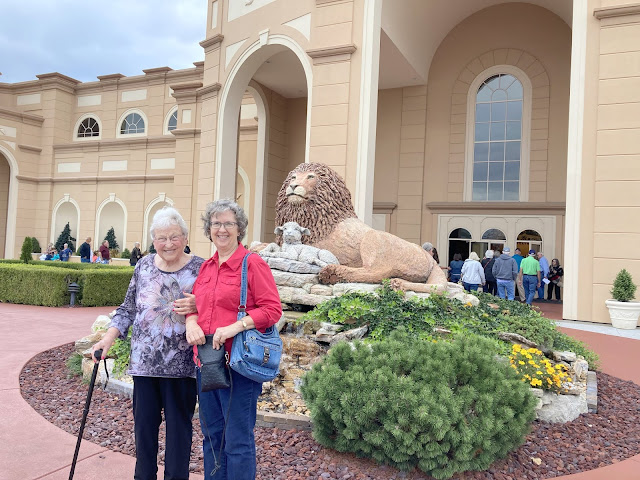 This year we are getting to watch "Jesus" and it might be the best one of all. Mark took this picture right before they announced that no pictures could be taken during the show. But the sets, and of course the story, were awesome! 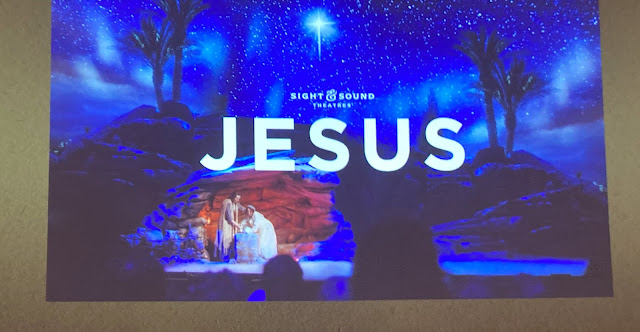 We had hoped to see more Ozark Mountain fall foliage, but autumn is running a little late this year. We drove home a different way, and we could just see some smudges of orange and yellow on the hillsides as we drove by. 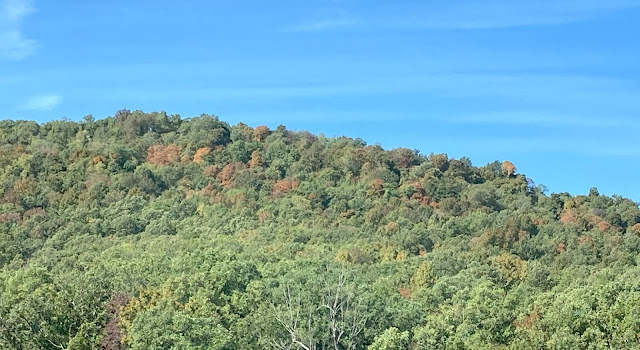 Driving this southern route gave us the opportunity to drop in on a special family friend in Arkansas. It was fun to see two 90-something-year-olds enjoying each other's company once again. These two ladies used to work together. Between the two of them, they raised eight daughters in the same community. 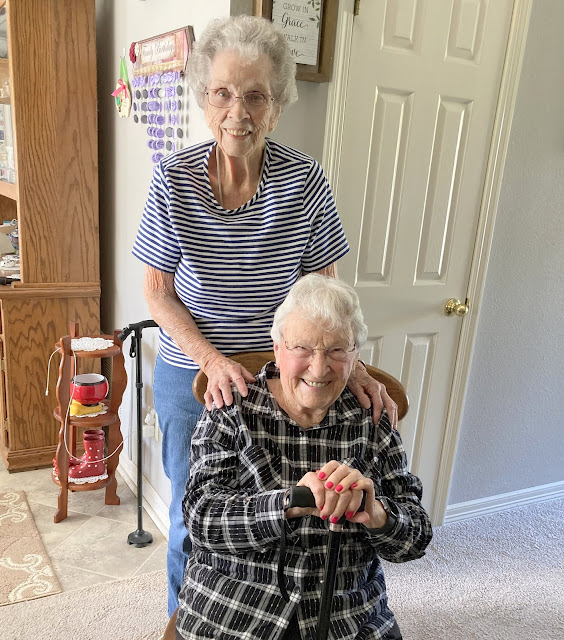 We returned to Oklahoma bearing gifts for the sister that didn't get to go on the trip. We brought a DVD of the show, and a puzzle of one of the sets from the Jesus show. We also brought some of those yummy sugared almonds from the concession stand at Sight and Sound. We enjoyed our annual "Girl's Trip" with some boys added, and one girl that didn't get to go this time. 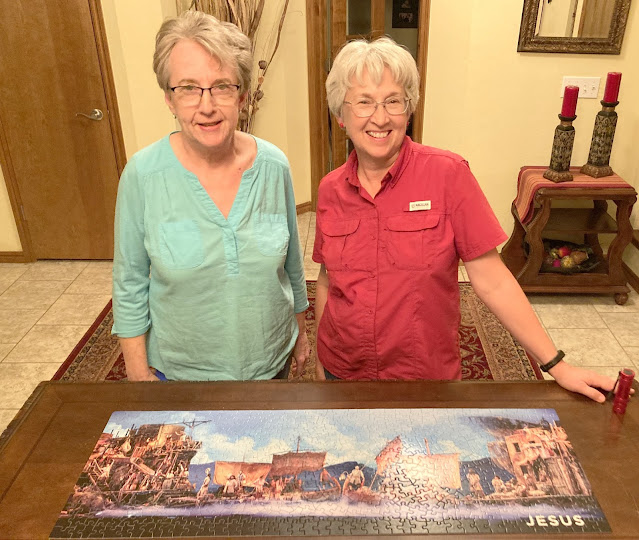