What does Mark have in common with Joe Biden?

We want you to take note of the title of this blog, so you can be speculating on the answer to the question we posed, "What does Mark have in common with Joe Biden?" In the meantime, we'll continue to blog about our travels. After a couple days of exploring the inland portion of Delaware, we are ready to head towards the ocean side of this tiny state. We're moving the motor home just 18 miles to our fourth Boondockers Welcome site. We've landed into another great yard with our private patio and full hook-ups. Wow! We feel so blessed! 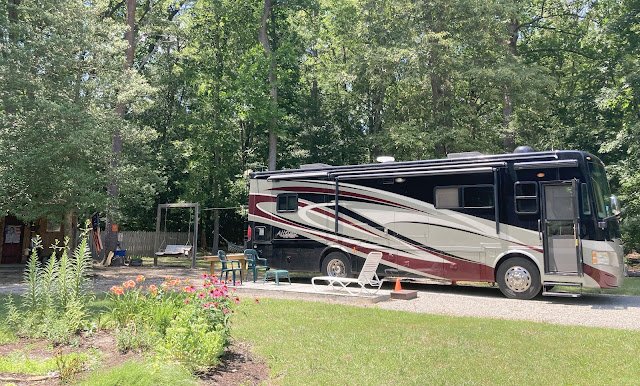 While the physical parts of this camping spot are first-rate, we found that our hosts were even better. We enjoyed getting to know this couple that so generously share their property with complete strangers like us. They also share their culture, which includes their membership in the Nanticoke tribe. Mike is a life-long member, and his wife, Linda, is an associate member. She is an important part of the tribe, using her talents as a seamstress to make dance costumes for the annual pow-wow. 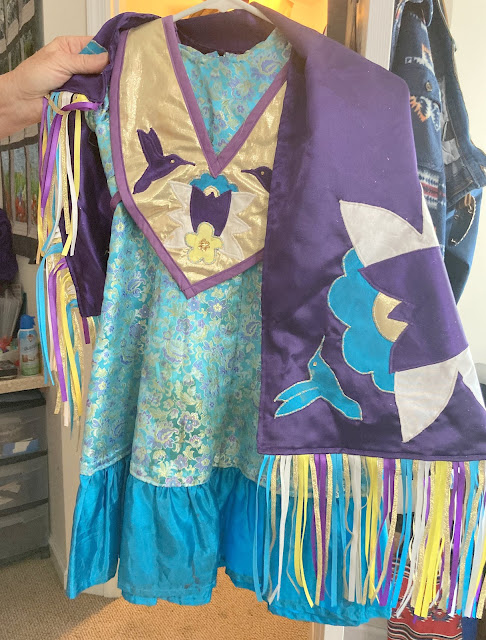 When she found out that Denisa also likes to sew, she opened up her sewing room and explained how she makes ribbon shirts and vests for the men, and jingle dresses for the girls. 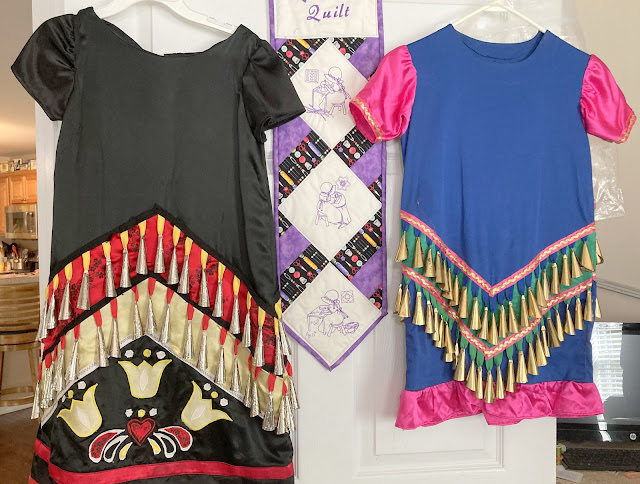 She's almost finished with this new jingle dress for a granddaughter that includes 109 jingles. Denisa found out that they are made from skoal can lids, and that dress is quite heavy! 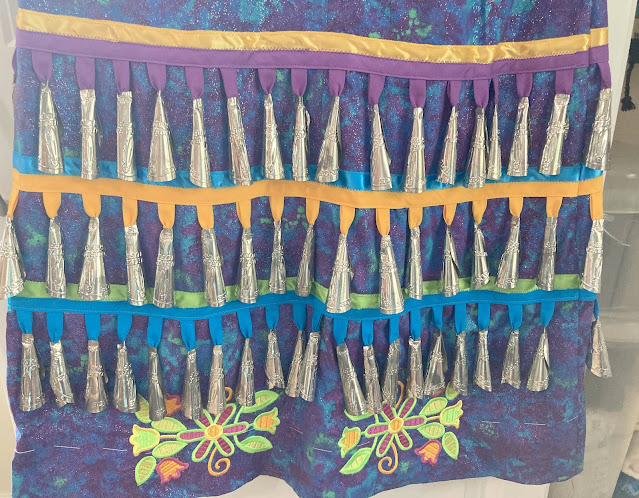 Many Boondockers ask a nominal fee to cover the cost of the electricity we might use. But Mike absolutely refused to take any money. So when Mark noticed that their back yard water connection was leaking, he offered to fix it as payment. They didn't have all the parts to make the fix, but it should be finished later this week. 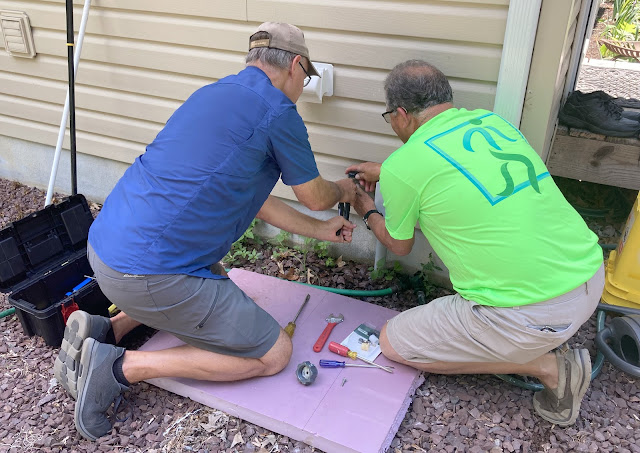 After Mark worked with that water project, we headed to the beach to play in the water. We drove the 17 miles to Cape Henlopen State Park. Since it was later in the day, we had this section of beach almost to ourselves. 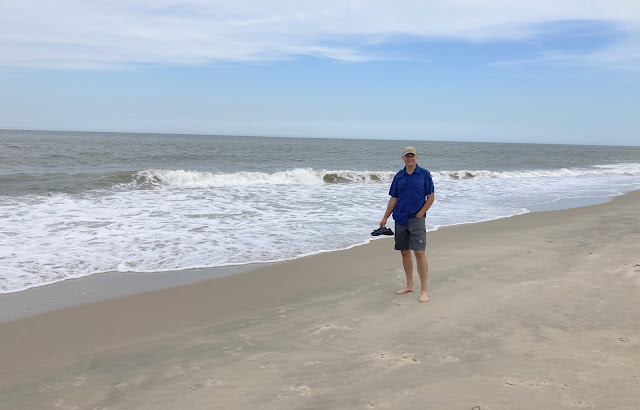 Henlopen beach is smaller than usual, because much of it is closed to protect the piping plovers that can nest here. 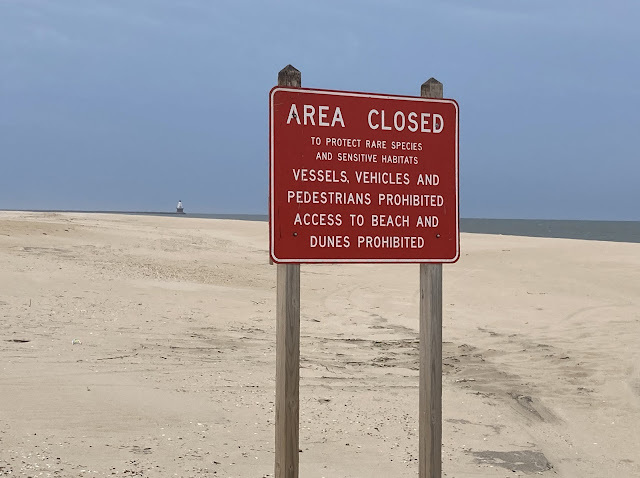 That complicates our mission today. Denisa has a couple lighthouses on her list in this area. But we can't walk out to the point to get the best view of them because of the nesting plovers. She can only stand here on a deserted beach and pretend to hold that far-away lighthouse in her hand. 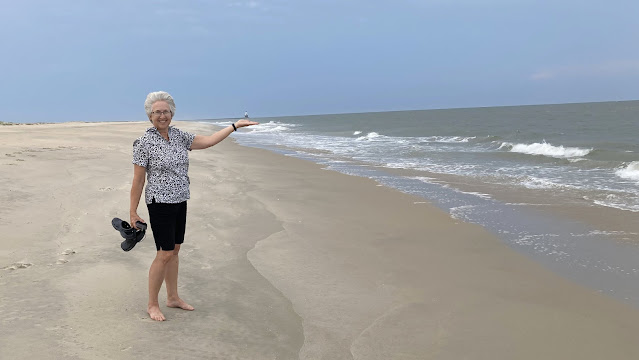 Looking the opposite direction, we could see that we were not nearly alone. On the other side of a barricade, vehicles are allowed to drive on the beach and set up a day camp. 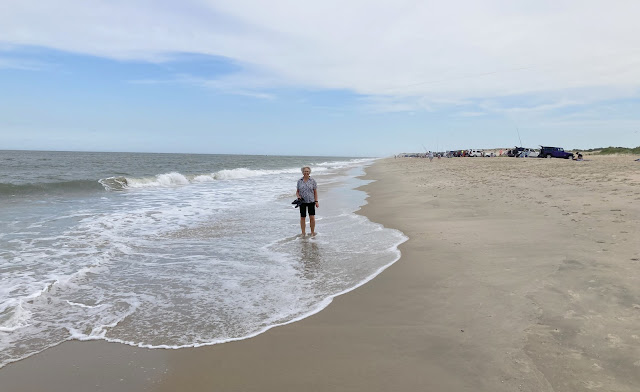 Armed with all the beach apparatus that will fit into a pickup, they stake a claim for the day. They have chairs and umbrellas and portable stoves on the beach. They also unload fishing equipment, and we have learned that this ruins our beach experience. We love to walk up and down the waterline, searching for shells and enjoying the waves. With that line of fishing poles--and the fishing line unfurled into the surf--we can no longer walk at the edge of the water without getting tangled up in fishing line. We could walk behind the poles, but that is usually blocked with chairs and beach gear. Walking down that beach behind the cars puts you so far away from the water that it doesn't feel like a walk on the beach at all. 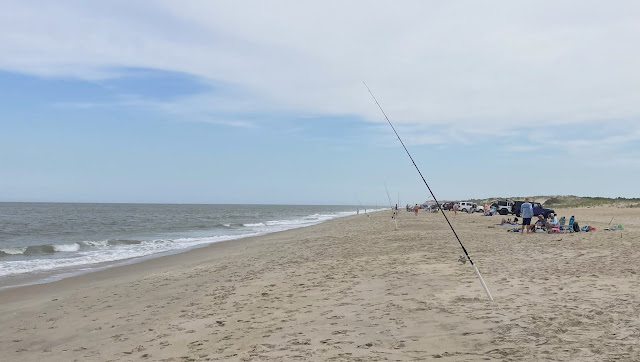 So we left the ocean side of Cape Henlopen State Park, and decided to check out the bay side. Here Denisa could get a peek at the second lighthouse she was chasing today. 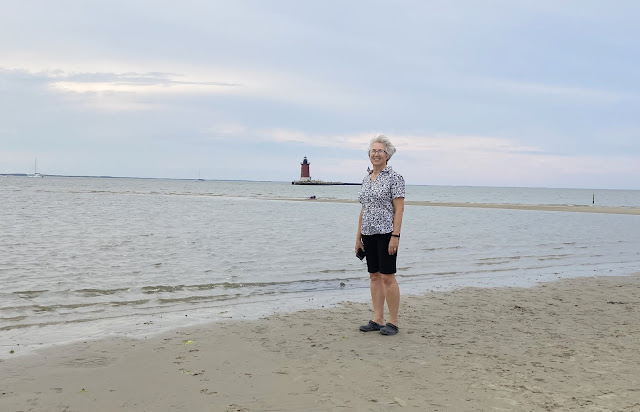 It's low tide, and there's thousands of snails out of the water now. 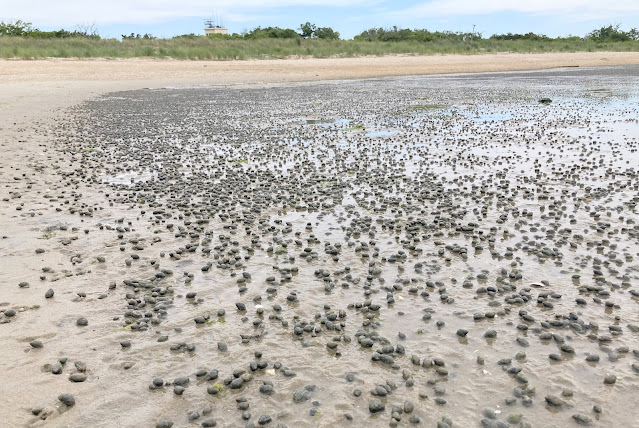 They are looking forward to the tide covering them up again soon. 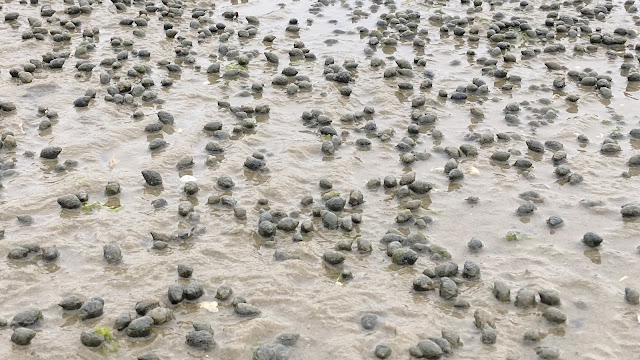 While it makes the snails uncomfortable, low tide allowed us to walk further into the bay to get a better picture of the lighthouse. The camera is zoomed in, and we can see the Breakwater Lighthouse pretty clearly now. 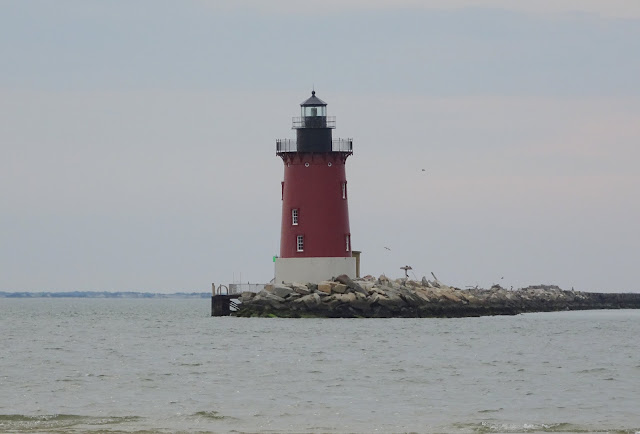 As we looked across Chesapeake Bay, we could also see the ferry that makes the trip between Delaware and New Jersey several times each day. We're especially interested in this ferry, because we will be driving the motor home onto its deck to make that ride in a couple days. 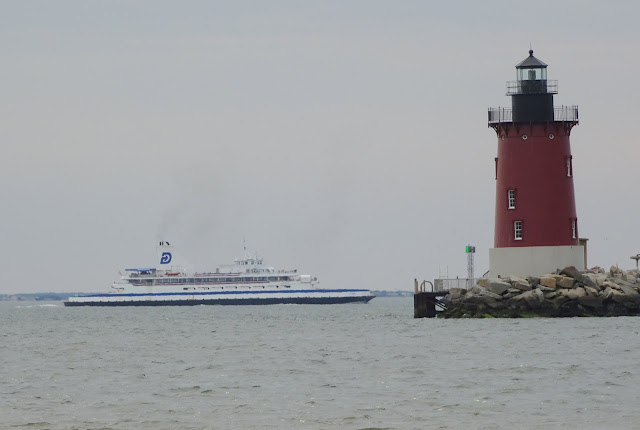 We spotted the other ferry coming from the opposite direction, so we waited to take a picture of the two ships passing near the lighthouse. The one on the left is carrying passengers from Cape May, New Jersey, heading to Lewes, Delaware. The one on the right is making just the opposite journey. 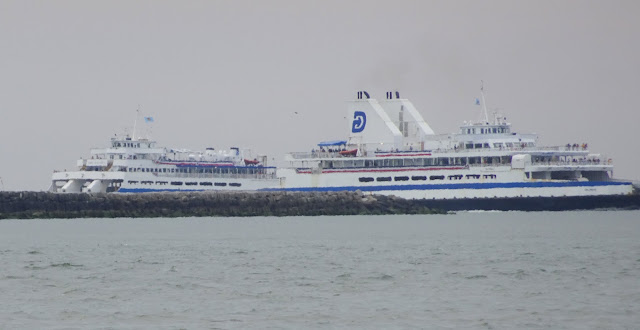 After we left the bay, we headed to explore other parts of Cape Henlopen State Park. They have a nice wide pier that allows visitors to walk out over the deep water. 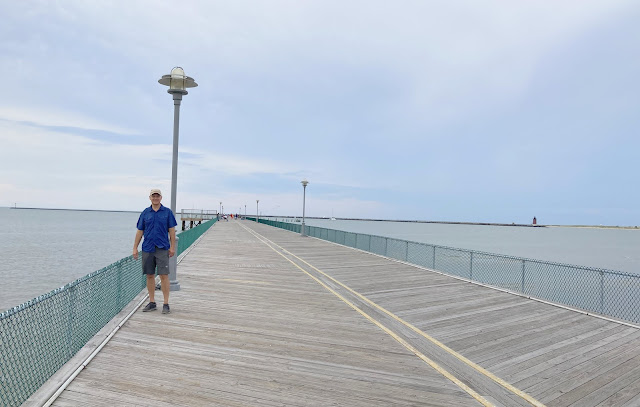 It also allowed us to get a better zoomed-in picture of the second lighthouse. This is the best picture we could get of the Harbor of Refuge Lighthouse compliments of the zoom lens. 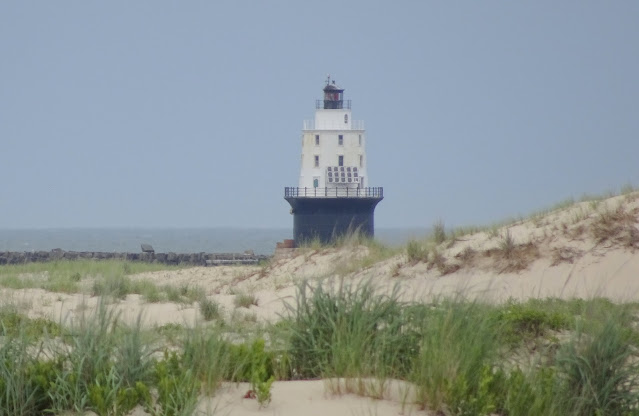 This state park also has another collection of tall round structures. We found out that this edge of the state served as a military base during World War II. These concrete watch towers were built to survey the water for enemy ships approaching. 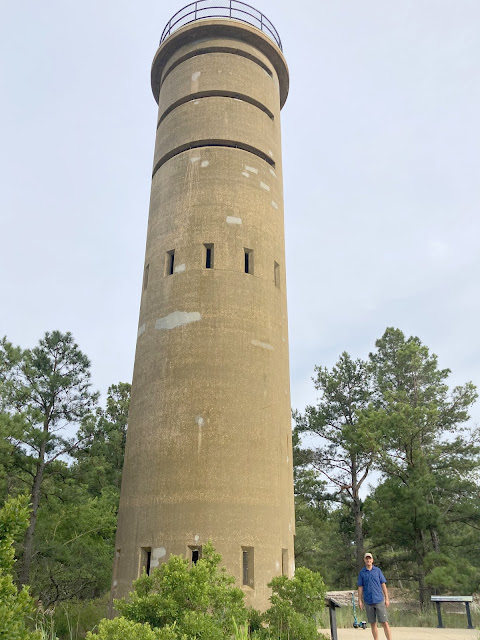 Now visitors are allowed to climb the steps to get the same view. We could also see the old military buildings that are fenced off from the rest of the state park. 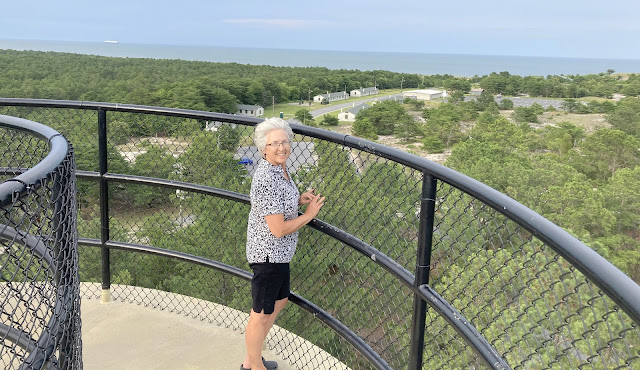 Our final exploration of the day is to ride this bicycle path that starts on the edge of Cape Henlopen State Park. 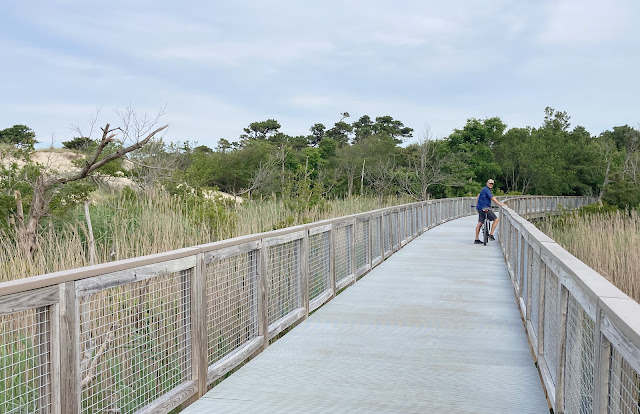 The sun was already lowering in the sky when we took off on Gordon's Pond Trail, which starts with a nice boardwalk ride. 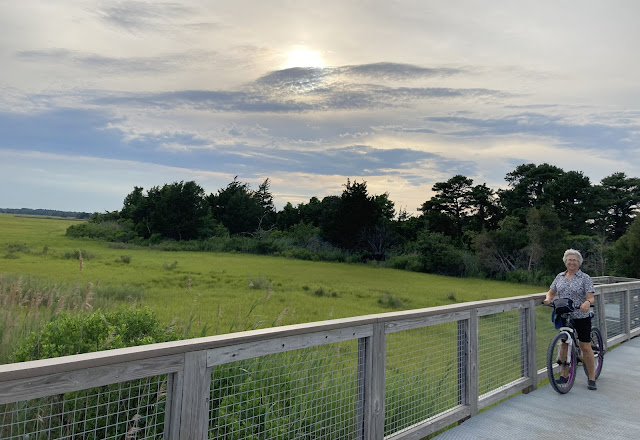 After we rode over the sand dunes, it brought us out to marsh grass views over the wetlands. The clouds and the views make us feel like we have wandered into another of God's wonders. 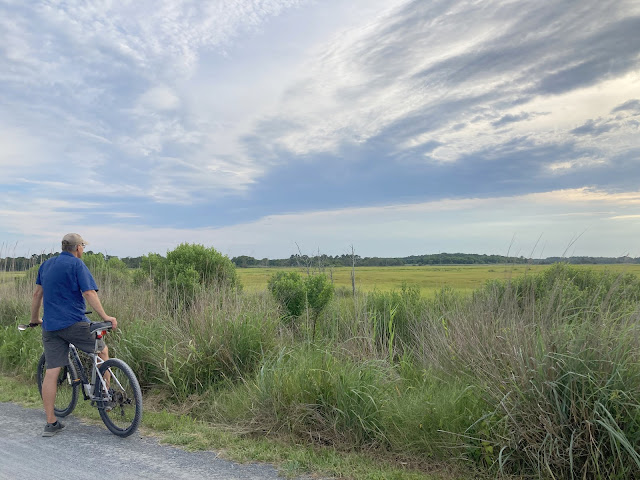 The only wildlife picture we have today is the baby bunny that was hunkering down in the grass along the bike trail. Our ride also took us along the water views of Gordon's Pond. This is one great bike ride with nice views and flat surfaces! 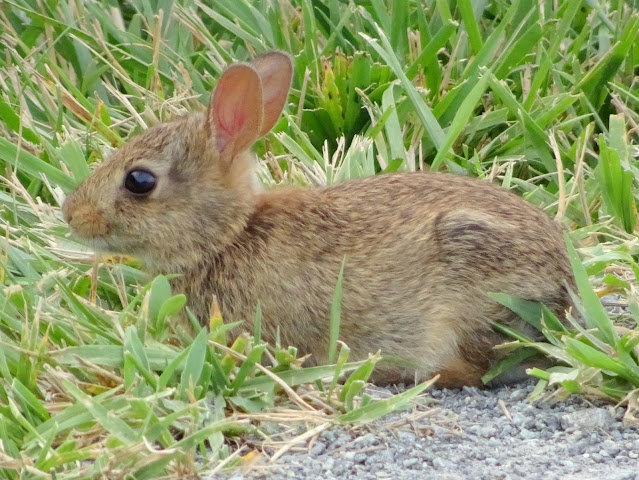 When we got to the end of this picturesque ride, we found ourselves in a paved parking lot in the town of Rehoboth Beach, Delaware. In fact, Mark did a little research and determined that this bike trail is a favorite with our country's president. 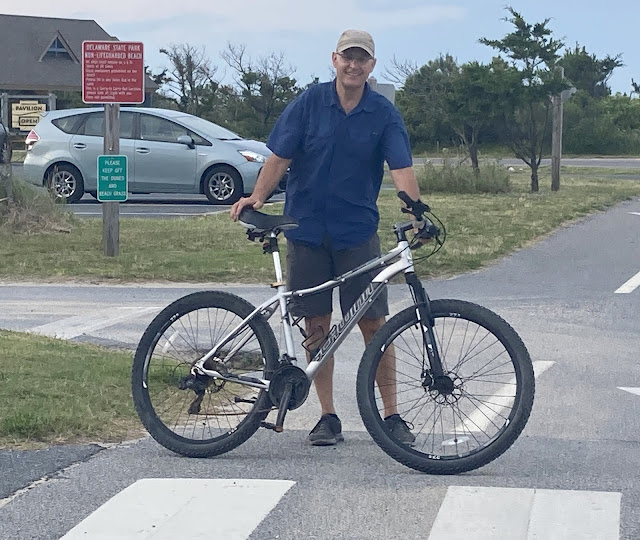 In fact, just a couple weeks ago Joe was in this very parking lot at this very cross walk. That's where he had a little bike wreck. 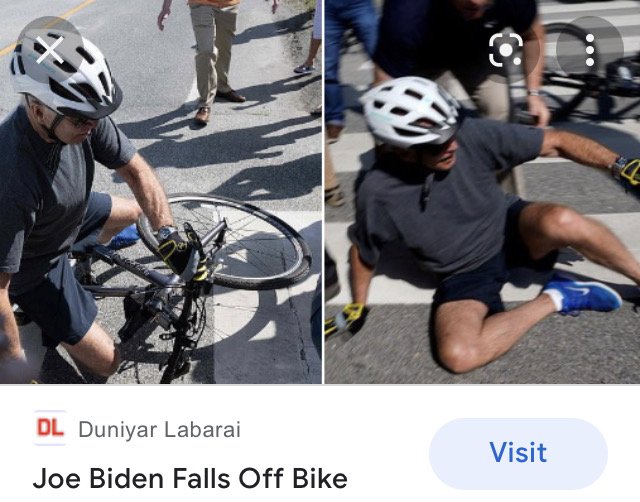 So in answer to the question of "What does Mark have in common with Joe Biden?" the answer is that he also laid his bike down at this cross walk in Rehoboth Beach, Delaware. Of course, instead of falling off it, Mark gently laid his bike down and then crawled under it. But the pose is very similar. 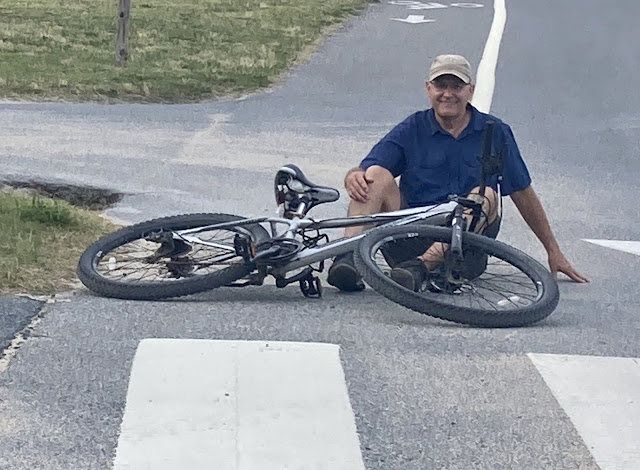 Marl didn't have secret service men to help him up, or adoring fans to swoop in with cameras. Actually Mark had one adoring fan--Denisa--who thought this was a crazy funny idea. Mark merged his picture with one from the news media.

Mark picked up his bike and we headed back down that nice bike trail to our pickup. Unlike the president, who owns one of the mansions in Rehoboth Beach, we drove back to our little home on wheels where we are boondocking for free. Mark really doesn't have much in common with the president, and we'd like to keep it that way.
Posted by Denisa and Mark at 5:33 PM