It was bitterly cold when we left Oklahoma early in the morning, driving towards the mountains of Colorado. It's an eight-hour drive, and it's always fun to see the first glimpse of those grand mountain peaks. 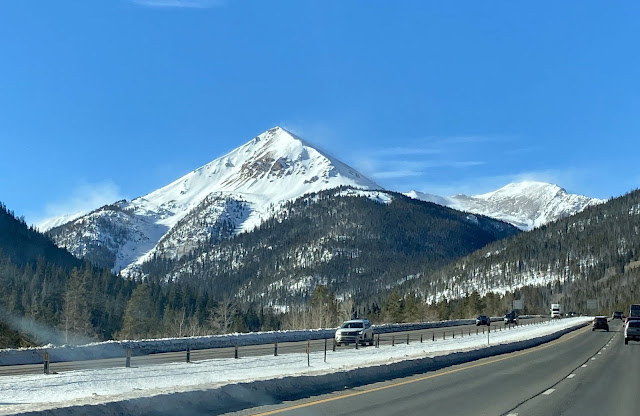 We took I-70 west out of Denver where one can find a long line of ski resorts. From this point, we are 5 miles from our destination of Breckenridge . . . or we could drive 7 miles to Keystone . . . or 12 miles to the Arapahoe Basin. We've already passed several turn-offs to other ski areas, with more down I-70. This area has some of the best skiing in the country. 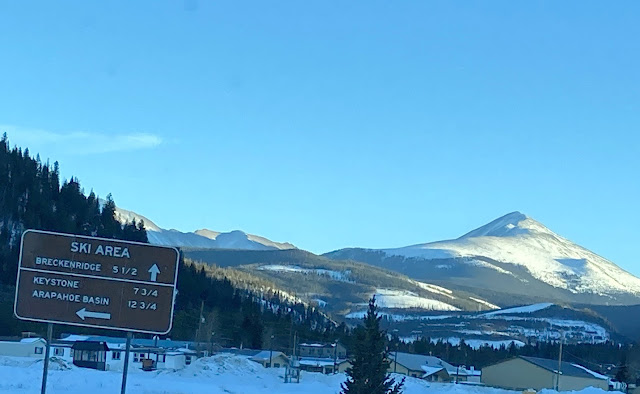 We're joining our children, who have planned a family ski vacation in Breckenridge, Colorado. We love to go skiing, and we especially love to spend time with this group that also includes our daughter-in-law's family. We have traveled together before, and our total number is up to twelve now. 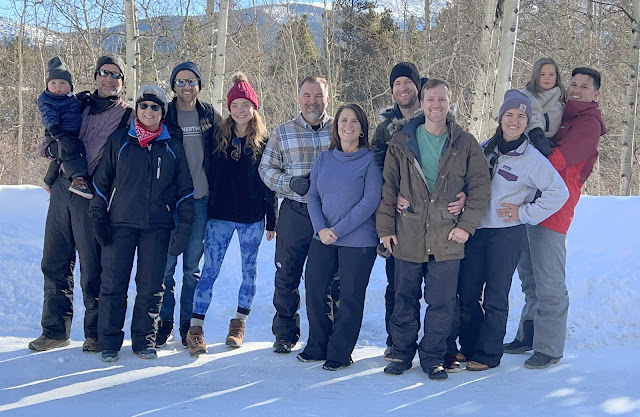 While we really like to ski, we have found that one day on the slopes is enough to satisfy us. So the first day we stayed at the house with our two grandchildren while everyone else skied. That allowed us to spend time with three-year-old "Dr. Carter," who enjoys giving pretend shots and pasting stickers (aka band-aids) on anything that could possibly look like an ow-ee. 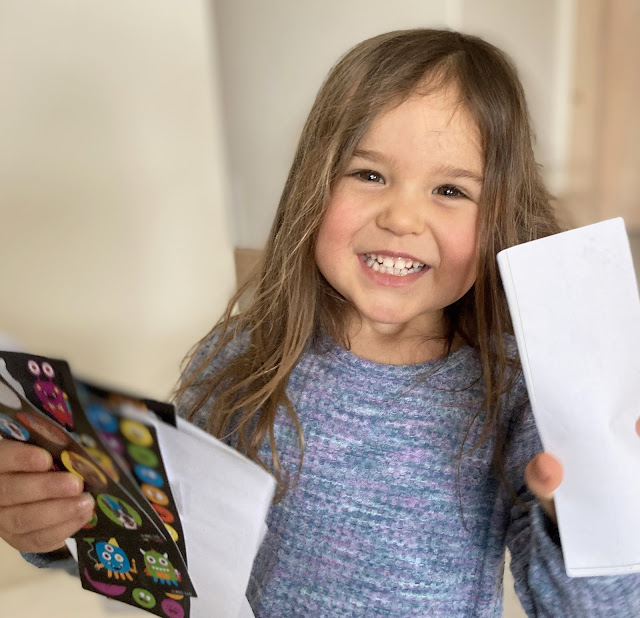 That also includes one-year-old Eli, who is now walking EVERYWHERE! He is keeping us on our toes as he goes up and down all the steps in this three-story house. The picture below is a summary of our day. Eli is brushing Grand-dude's hair while leaving lots of fingerprints on his eye glasses. You can see that Dr. Carter has already doctored Mark's hand with a sticker bandage. Grand-dude is obviously loving all of it with that big smile on his face! 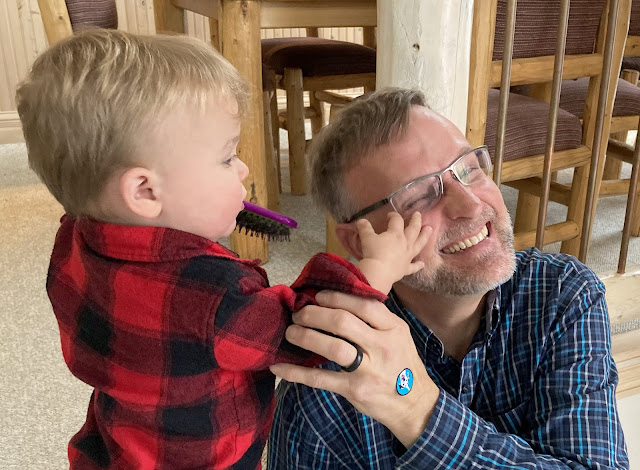 Grand-dude was also loving those snuggles right after Eli woke up from his nap. When little Eli is still in a tired mind-set is the only time he will sit still long enough for a picture. The rest of the day he is moving at full speed. 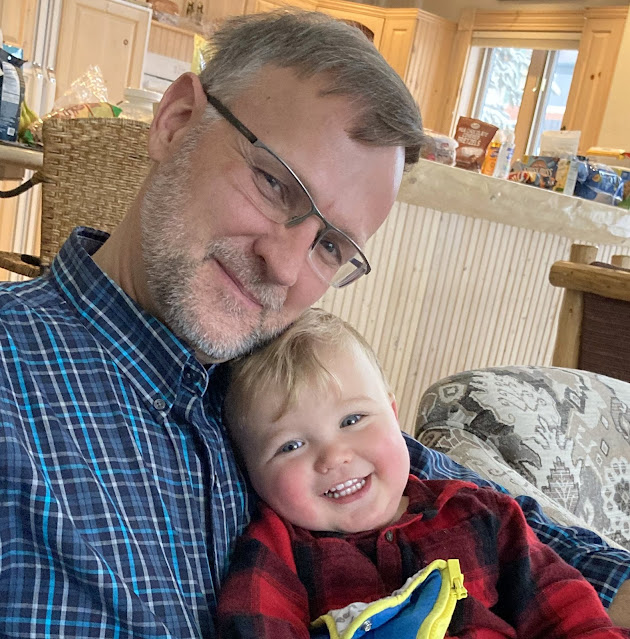 The weather forecast showed a 30% chance of snow flurries, but the day turned into a 100% chance of heavy snow. We took this picture from our front door, and we could barely see the house across the street because the snow was falling so thick. 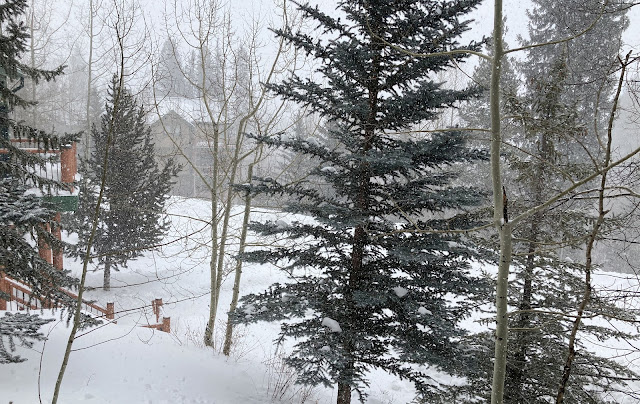 Our group of skiers also couldn't see very far on the slopes. The good news is they got to ski in fresh powder today. The bad news is they had to endure the wind and snow of the sometimes blizzard conditions on the mountain. 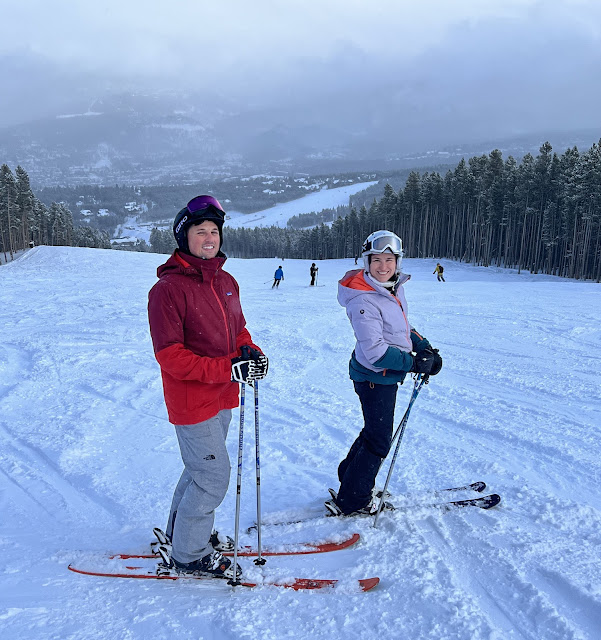 The mountains of Colorado have had less snow than usual this year. In fact, we had been watching the Breckenridge ski resort web site seeing that many of their slopes and chair lifts were still closed in late December. But in the last couple weeks, they have gotten enough snow to open up most of the runs. Today's additional snow will help with that process. By the end of the day, the trees were blanketed in fresh powder, our vehicles had a three-inch layer of snow, and the street in front of our airbnb rental was covered. 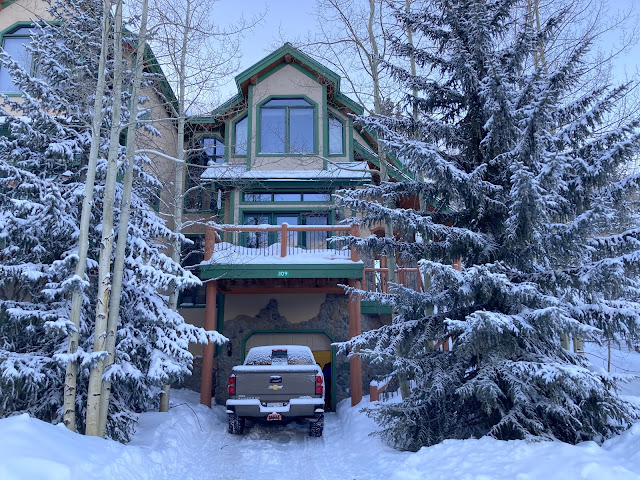 Every family unit takes a turn to cook, and this is our evening to prepare a meal for the group. So besides baby-sitting, we were also cooking. We made spaghetti sauce (both vegan and with meat), spaghetti noodles, spaghetti squash, garlic bread, green beans, salad, and fresh pineapple. That covers all the dietary needs of our group. Then we played games every evening. Before the children go to bed, their adoring grandparents and aunt and uncles do anything they want. That would include lining up into an imaginary train to get to an imaginary destination that Dr. Carter--now turned Train Engineer Carter--has determined. 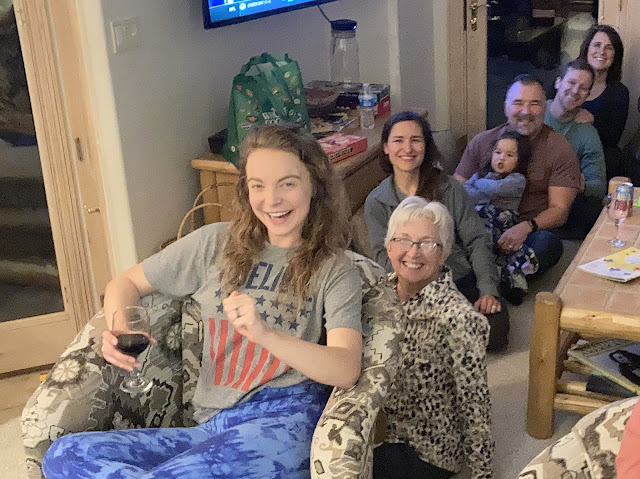 After the children's bed time, the adults play games. One of Denisa's favorites is "Just One Word." Our daughter-in-law took this picture of all the Engelmans lined up on the couch in heavy thought trying to determine the best "one word." 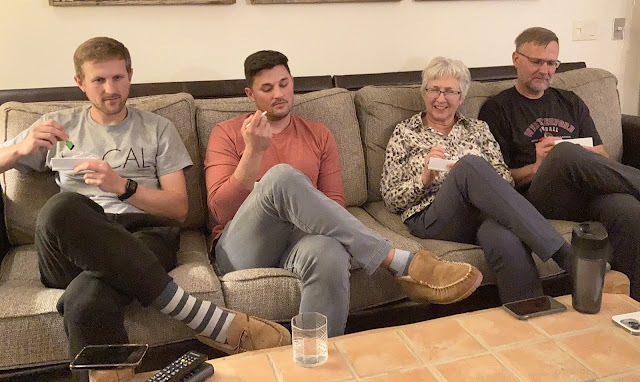 For us, it's been an in-door day. It seems a little funny to drive this far to spend the first 24 hours inside the house. But we'll be enjoying those beautiful mountains for sure tomorrow!
Posted by Denisa and Mark at 5:10 PM